How to Talk to a Climate Change Denier 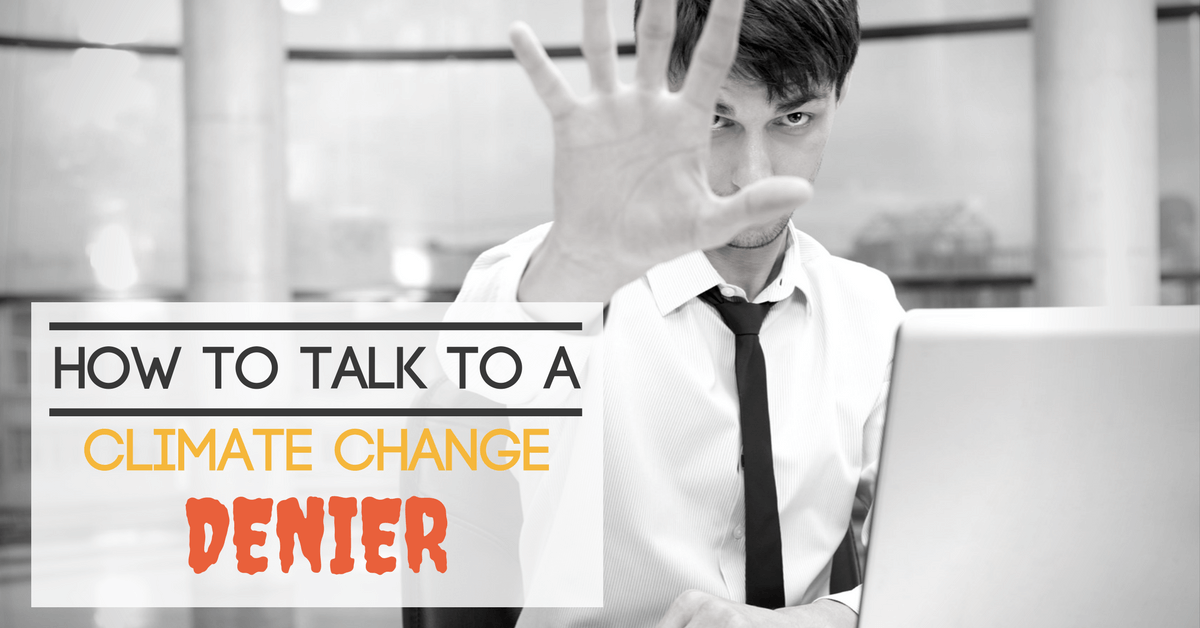 Having a constructive and rewarding conversation with a climate change skeptic can seem like a challenge and unnecessary hassle at the best of times. When someone seems  anti-fact and disinterested in the scientific research, it can be all-too-tempting to get up and leave.

But, when you do encounter a climate denier, remember it’s an opportunity to open their mind and broaden their perspective.

Here are 6 practical tips to having a meaningful conversation with a climate change denier.

1. Don’t turn down the conversation

Don’t be tempted to walk away or shut a climate denier down; this doesn’t need to be an argument. Willingness to engage in an open and respectful manner may pave the way for future conversations.

Remember when Anthony Watts (the well-known climate denier) was open to chatting with Bill McKibben (environmental activist and founder of 350.org)? He did so, because Watts believed McKibben had always been civil and courteous despite their opposing views. Listen carefully to your challenger so that you can better understand their position and find out what motivates their beliefs, and go from there.

Being adversarial won’t help the facts get out there, so take every opportunity to open up the dialogue. If you keep the channel open for future conversations, you could end up changing their mind eventually.

Whether you’re talking about the research, economic arguments for or against, or the impact of climate change, focus on what you agree on rather than what you don’t. If you spend some time talking about common areas, you may spend at least some of the time agreeing with each other.

For example, you could focus the conversation on the:

It’s hard(er) to disagree with these points.

When those more contentious issues arise, rather than trying to argue your case, point to the research. It can be easier said than done (especially if you’re not one for facts and figures), but try to remember a few key facts to have in your back pocket. Or direct your conversation partner to authoritative sites such as NASA or the independent Climate Council and let the facts speak for themselves.

One popular approach with climate deniers is to absolve personal responsibility by blaming it on China or India. China may be the world’s top emitter of greenhouse gases, and India may be continuing to build new coal fired power plants like they’re going out of fashion (ahem).

But Australia is the top emitter per capita, mostly due to our coal-fuelled energy sector. It’s useful to point out that individually, countries like the US and Australia emit more than China. Whole-country figures don’t show the real picture with respect to emissions unless they are assessed per capita.

Another important fact to note is that China recognises the importance of reducing greenhouse gases and is shifting to renewable energy faster than any other country globally. As an indicator of their commitment to green energy and willingness to act rapidly, the PRC already has the biggest wind and solar industries in the world.

According to Greenpeace estimates, China erects another wind turbine and installs enough solar panels to cover a football field every hour. 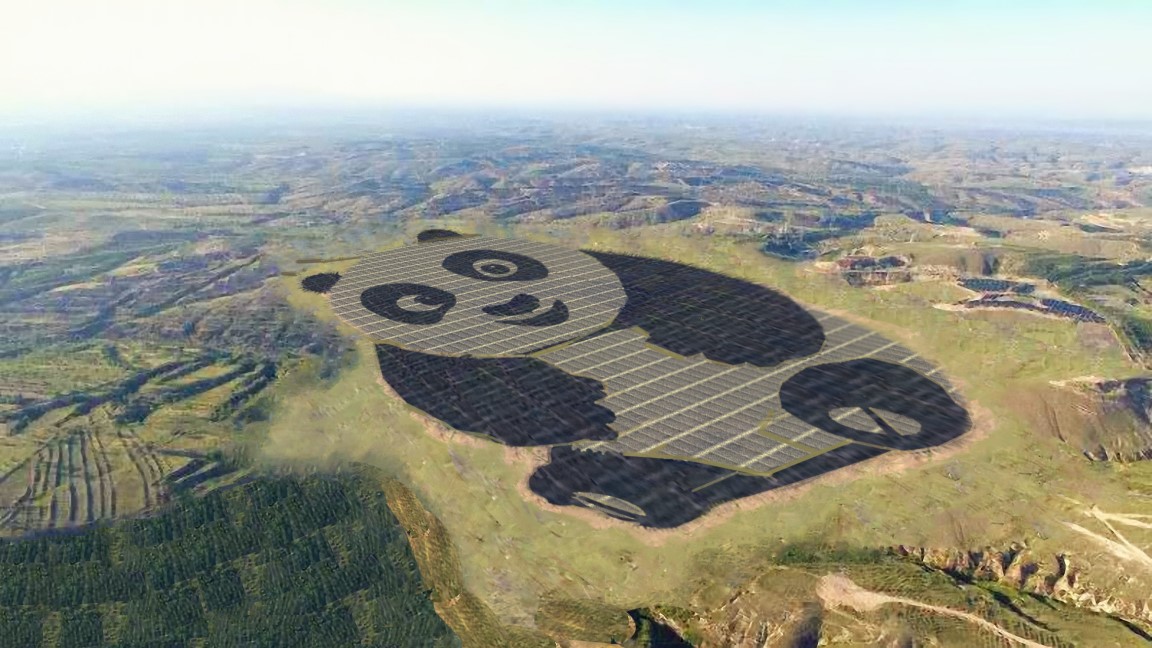 Another popular tactic for climate deniers is to argue people will lose their jobs when the fossil fuel industry is wound back. This is a trickier argument to combat. There is, after all, a point of validity from the denier’s side.

There’s no harm in agreeing with your denier-friend on a few issues such as this one - as mentioned above, common ground can in fact help to build the relationship. So if you’re confronted with this argument, it could be a good idea to agree that this is indeed a concern. Then point out that people employed in the coal and oil industries should be given first right of refusal when it comes to green jobs.

Suggest that government policies should be implemented to ensure this right, and that warnings should be given so people who depend on these industries are given a chance to transition. Also highlight that going forward, pursuing renewables will create more jobs than business-as-usual (fossil fuel) approaches.

Take the closure of the Port Augusta coal-fired power station in May 2016 as an example. It was recently announced that this location will soon become home to a giant solar thermal plant, the biggest of its kind in the world, which will provide over 700 jobs to the local community once opened.

When faced with this argument, you can also focus on the economic benefits of green energy. Solar and wind production costs have fallen dramatically, and they’re now almost as cheap as coal. So already we have clean energy at comparable prices, which means industries, businesses, and households can reduce their energy costs while minimising pollution.

5. Talking about the evidence

Climate change deniers tend to make standard arguments when they try to argue against the evidence. Here are a few common responses in opposition to climate change, and ways to combat them:

6. Link it back to people’s lives

While the tragic plight of the polar bears and the melting Arctic are compelling arguments, for climate deniers it’s often a matter of personal impact. It can help if you draw the focus back to the impact on people’s lives. Rather than focusing on geographically distant events or abstract concepts, once in awhile bring the conversation back to the relevance for the average person living in rural and urban Australia.

For example, you could talk about the wildfires that happen in summer, or local droughts and water restrictions. Mention that climate change impacts like habitat destruction have a negative consequence for fishermen and farmers who depend on relative climate stability for their livelihoods. You can discuss the heartbreaking destruction of one of the world’s natural wonders in our own backyard (the great barrier reef), and the uncertainty facing the whole tourism industry in north Queensland.

If they come back to you saying that the increasing incidence of major climate events is just “the weather”, try showing them this video from National Geographic to explain the difference:

Keep it light & join the fight

Being open and civil can help you win an argument when talking to a climate change denier. Having the facts on hand will also enable you to argue the evidence successfully. If all else fails, keep your sense of humour rather than alienate your conversation partner.

If at the end of all this you get the old chestnut, “yeah but what impact can one person really make anyway?”, don’t forget to let them know how they can make a difference. One of the most meaningful actions ordinary  Australians can take to limit their impact on the climate is to switch their investments out of fossil fuels. That includes their super - which they probably don’t realise is funding fossil fuels in the first place. We’re Australia’s first fossil-fuel-free super fund, and we’ll make sure your money empowers renewables and other ethical industries. Join online in two minutes, or contact us today for more information.