11 Important Reasons to Help Us #StopAdani 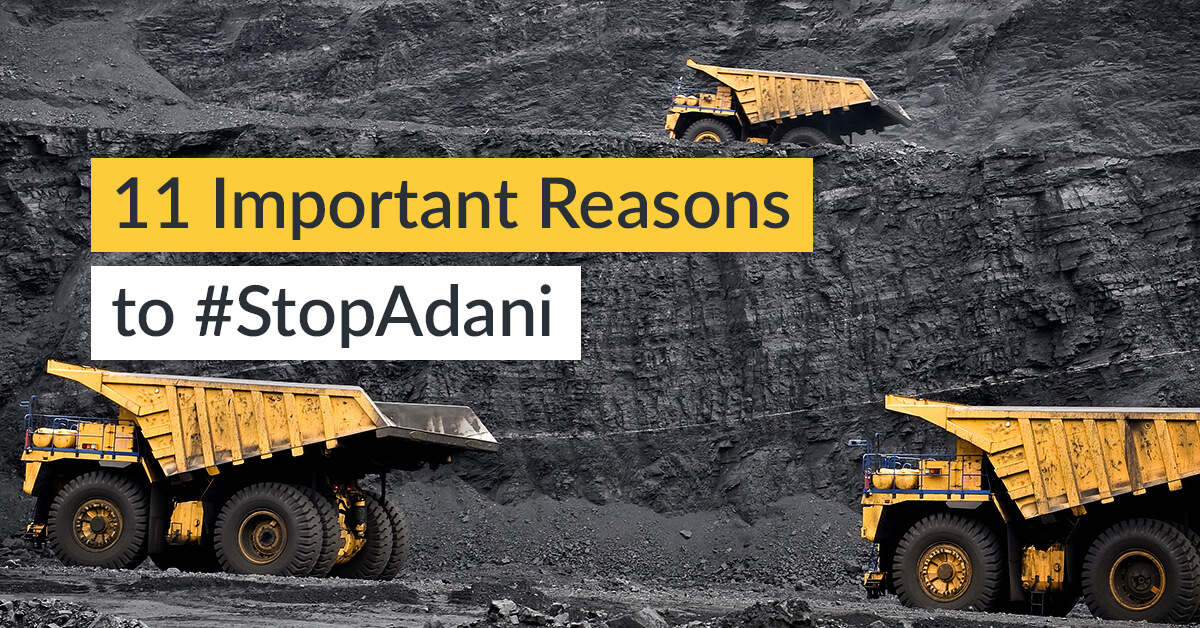 Environmental damage, taxpayer rorts and a failing business model. These are just some of the very real concerns Australians have about the proposed Adani Carmichael coal mine. And rightly so – if the government allows the Adani mine to go ahead it will be more than just one of the biggest coal mines in the world. It will be one of the biggest mistakes as well. Here’s 11 reasons why.

Help us #StopAdani and make the switch to Future Super today. It only takes 2 minutes.

1. It’s about more than just jobs versus the environment

A Four Corners investigation in October 2017 uncovered a company with a troubled history, rife with legal disputes, and a dubious moral compass. The investigation uncovered government reports listing deliberate and wilful violations by Adani. And this is before construction in has even begun.

Why would the Australian Government allow a company like that to not only set up shop in Australia, but also offer up a billion in taxpayer funded loans?

2. Most Australians don’t want the mine

Despite political preaching to the contrary, most Australians don’t actually want the mine.

As reported on Q&A in early October 2017, an SMS Survey found the majority (53.5%) of Australians don’t think the Adani mine should go ahead, as opposed to only 16% that say it should.

Greens leader Richard Di Natale says he’s prepared to protest and even get arrested to stop the Adani mine, and expects that thousands of Australians will join him –

“Make no mistake, people right around the country are so motivated to stop this thing that if we can’t stop it in the parliament we’ll stop it by standing in front of those bulldozers.”

The Adani situation is symptomatic of a larger political problem, where neither major party are prepared to represent Australian beliefs and instead succumb to the lobbying of a company that is prepared to add 128 million tons of carbon dioxide into the atmosphere each year.

3. Coal is a weak resource

Fossil fuels are losing popularity. In the wake of more efficient and environmentally friendly options, many consumers are looking elsewhere for their energy needs.

The International Energy Agency’s Medium-Term Coal Market Report 2016 found that though global demand for coal has stalled, Australia continues to ride a wave of prosperity on the back of one of the world’s dirtiest resources.

As the world’s largest exporter of coal, Australia doesn’t need another dirty mine. It needs innovators to step in and build forward-thinking solutions for a cleaner future that doesn’t include coal or gas.

If it goes ahead, the Adani coal mine would be the largest the Australia has seen. Six open cut pits and five underground mines, it’s an area 7 times larger than Sydney Harbour at a huge 28,000 hectares. Despite all this, it will only create a handful of jobs and largely benefit a shady company that has little to do with our Australian well-being.

“The planned mine is so large, it will materially affect the future of global warming.”

5. A bad deal for Australia 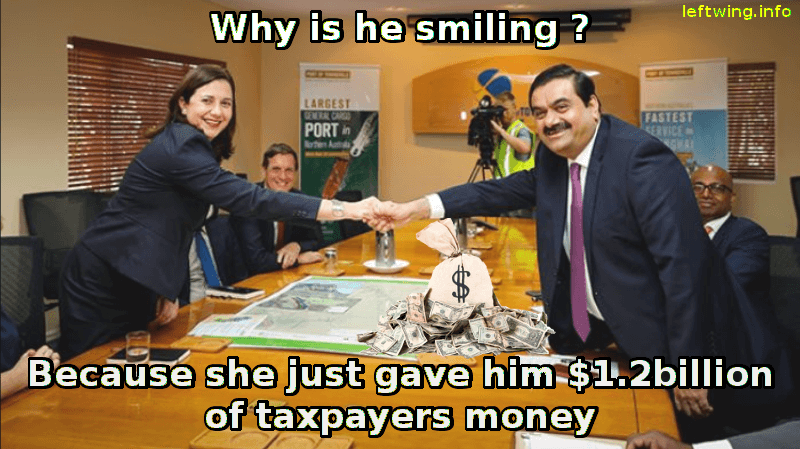 Environmental damage and climate change caused by the Adani Carmichael coal mine will be felt for decades to come, but there are more immediate concerns as well. The government will contribute $1 billion in taxpayer money to the coal mine in the form of a ‘loan’.

If the coal mine was really such a good deal for Australia, why does the government need to dip into our pockets to fund a third party business venture? Perhaps the coal mine is nothing more than a cash grab at our expense?

The Carmichael mine will have very real effects on animal species as well.  The southern Black Throated Finch is already close to extinction. A large concentration of the remaining population lives in the area of the proposed coal mine. Destruction of that area will push the bird to the edge of extinction.

Further to this, the port terminal is set to be constructed next to the Wetlands, home to over 41,000 bird species and a nesting ground for turtles in the area. If the port goes ahead, it will mean massive disruption, reduction in numbers and in some cases even extinction of important Australian species.

Surplus stockpile from the port will be stored near ancestral grave sites and shell middens left by the Juru nation, local indigenous tribes and the first people of the area. Only 50 metres from these sites, the potential for desecration of these significant areas is everpresent.

8. The Great Barrier Reef is under threat

Australia is a country of unique and incomparable beauty. And as the world’s most extensive coral reef ecosystem, the Great Barrier Reef needs to be protected, and Adani’s coal mine puts the reef under direct threat.

Since the mine was approved in 2015, the Great Barrier Reef had suffered its two worst coral bleaching events in history. And it’s only set to worsen with the construction of the mine.

If the Carmichael mine goes ahead, the equivalent of a quarter of Australia’s total emissions from fossil fuels will be unleashed every year. And once the terminal expansion in Abbot Point is complete (right next to a UNESCO World Heritage Area), other mines will suddenly become viable, potentially opening a new era for coal mining in Queensland.

With the reef already under threat, do we really need to place even more pressure on this fragile ecosystem?

Australia is a dry country. Drought can spell disaster for crops, farms, and even whole communities. While the rest of the country must practice efficient water usage, Adani will acquire between 5 and 12 billion litres of water to run each year. Water tables a kilometer away are expected to drop by one metre, while the Carmichael mine will use enough water annually to account for 3 years of water for every person in Queensland.

10. The mine will contribute to the deaths of people as well

Beyond the risks of mine construction and excavation, the very real threat of climate change poses a serious threat to our well-being as a large contributor to climate change. Already, the world is on course for a 4-5 degree increase in temperature that could lead to massive disruption and an end to much of the life on Earth.

Australia must face the reality that climate change is happening. The Adani coal mine will contribute a 2 degree rise in temperature on its own. Australia has to meet its obligations to reduce emissions and help stabilise rising averages across the globe. The alternative is to court danger on a massive scale.

Numerous investigations into the company’s prior behaviour have found that Adani is a group that places profit over people. Willing to pursue their own outcomes at any cost, they have already faced significant legal challenges in other countries, and have done little to curb their reputation since. Australia has always been about a fair go.

Aligning ourselves with a business that doesn’t care about anything except their bottom line is the opposite of what Australians stand for. Take a stand against companies that invest in dirty businesses like Adani.

Need anymore convincing as to why Adani is a environmental and humanitarian nightmare? Watch the video below.

Join the fight and help us #StopAdani

For everyone who joins and switches their super to Future Super in November, we will donate $50 to initiatives fighting Adani’s Carmichael coal mine. Donations will go toward the Wangan and Jagalingou Family Council to support their fight against Adani in the courts, the Australian Youth Climate Coalition to support their #StopAdani activities, and the Australian Marine Conservation Society to support the ‘fight for our reef’ campaign. Make the switch to Future Super and help us #StopAdani now.