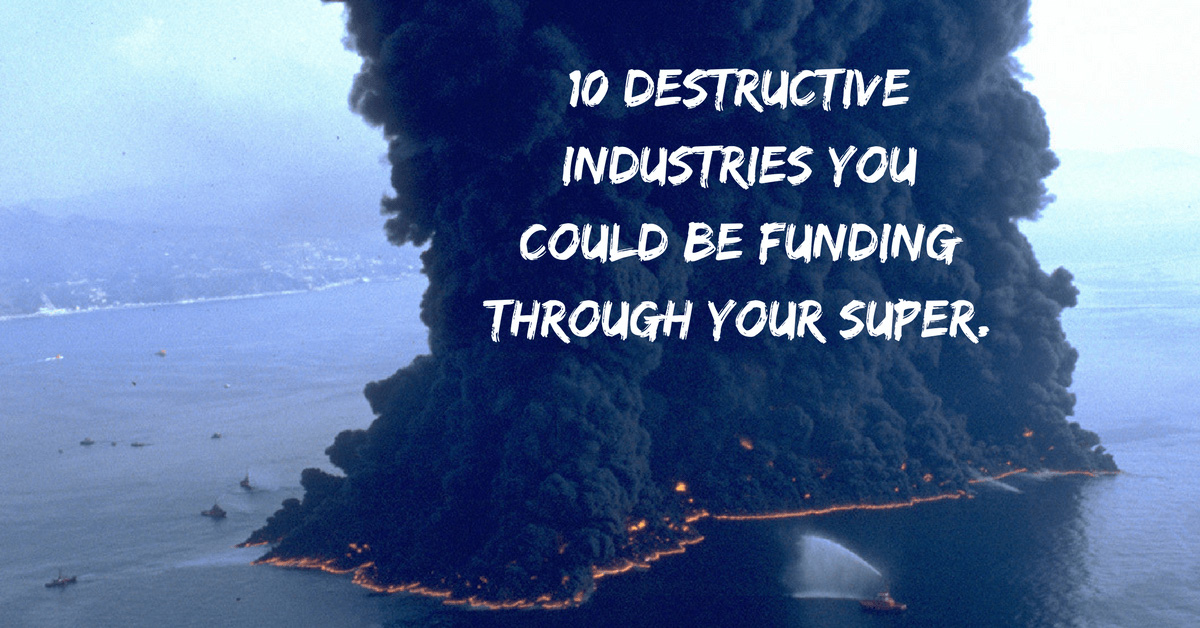 Ethical super might be gaining momentum due to greater social awareness of unethical investments, but it’s still not always easy to find out which companies your super fund is putting your money in. Standard super funds invest in at least one of many harmful industries, so you’ll want to do your due diligence and make sure you’re aware of where exactly your money is going, as well as whether your super fund is an ethical one.

The industries you’ll want to avoid

While the question of ethics can be subjective, there’s general consensus about what’s ethical and not ethical in an investment. Some of the most harmful sectors and issues are fossil fuels, animal cruelty, gambling, tobacco, big banks, offshore detention, nuclear weapons, and old growth forest logging. These industries cause direct harm - such as fossil fuels with pollution and greenhouse gases - or they enable a harmful industry through funding, such as nuclear weapons and uranium.

The fossil fuel industry and its related verticals are leading causes of climate change, which in turn have a harmful impact on our health and stability as a society. Whether it’s direct industries such as mining or petroleum refining which have heavy involvement in fossil fuel extraction, or supporting companies that provide services to the fossil fuel industry like engineering and finance, these sectors have an extremely damaging impact on our world and the changing climate.

“82% of Australian super funds are at risk of legal action over climate failure.”

Given the size of Australia’s superannuation industry and its heavy sway towards carbon-intensive investments, it’s imperative to choose a super fund that has completely divested from fossil fuels.

The big four banks continue to support the destructive fossil fuel industry by financing companies in the sector with the money from Australian households. In the years 2008 to 2016, ANZ, the Commonwealth Bank, NAB, and Westpac loaned a staggering $70.3 billion to fossil fuel companies around the globe; $49.9 billion of this went into fossil fuel companies in Australia. Say no to investing your super into funds that include any of the big 4 banks in their investment portfolio.

Around 50 percent of super funds invest in tobacco, despite the fact that 15,000 Aussies die due to tobacco-related illnesses every year. The negative impact of tobacco is profound; not only is smoking the leading cause of preventable death worldwide, but the environmental impacts of tobacco production are far-reaching, with all phases of cigarette production contributing to GHG emissions.

“The harmful impact of the tobacco industry on deforestation, climate change, litter, and forest fires is enormous and growing.”

Non-profit groups like Tobacco Free Portfolios have led the drive for divesting from the tobacco industry, and to date 35 large super funds are now free of tobacco investments.

Your money could be invested in private service providers that enable and profit from the detention of people seeking asylum, if your super fund hasn’t already divested from such companies. Companies like Serco, Transfield Services, Wilson Security, and OTOC are well known for profiting from Australia’s offshore-detention policy.

Several major super funds have already divested from these companies as a result of public backlash against these types of unethical investments, however there are still dozens of funds which still invest in companies that – directly or indirectly – fund Australia’s offshore detention programs.

Nuclear-supporting industries such as uranium are unethical as they impede non-proliferation efforts to prevent the spread of nuclear weapons and weapons technology. Big Australian banks like ANZ, Commonwealth Bank, Macquarie Group and Westpac are among the financial institutions investing in the manufacture of nuclear weapons, through companies such as General Dynamics, BAE Systems, Northrop Grumman and more, that provide the infrastructure to develop or modernise nuclear weapons.

Some firms and super funds, like Future Super, have developed detailed policies to prevent investing in nuclear-weapons manufacturers, nuclear-weapons-supporting companies, and primary producers like uranium miners.

Related to the nuclear and uranium sectors is the armaments industry. These companies enable militarism and support regressive regimes in countries around the world, and they may play a significant role in enabling and prolonging conflict, and in turn the suffering and displacement of populations.Some super funds in Australia have divested from all weapons-related investments, so it’s worth finding out whether your fund has too.

The live exports industry is notorious for its cruelty, but even the most dedicated ban-live-export campaigner might be unaware his or her super is invested in companies like Zhoushan Fanda Australia Cattle Co or other major players in the sector. Also, related are companies that engage in unnecessarily cruel treatment of animals, such as forcing animals to perform for entertainment, cosmetic animal testing, factory farming, and intensive animal agriculture.

Old growth forests are recognised as having very high aesthetic, cultural and natural conservation values. Their protection and management is hugely important in the maintenance of Australia’s biodiversity and ecological functions. Old growth logging is considered a damaging practice because old-growth trees are essential for native and endangered species.

Australia is considered a leader in global deforestation and in turn the extinction crisis. Therefore, as an ethical investor, it’s likely important to you to avoid investing in these logging companies and organisations that trade with these companies.

Forced labor and human trafficking remain major problems in the world, with 21 million people affected globally. Slave labour may sound like a remote issue, but for Aussie consumers and investors it can be as local as the big name chocolate bar you choose for a snack. Ethical super funds avoid investing in companies that engage in slavery and forced labor, including child labor.

Australians are the biggest gamblers in the world on a per capita basis, losing $23 billion in the past year. Options like pokies can be highly addictive, and online bookies and gambling also contributed to problem gambling. One in six Australians is a problem gambler, and gambling is estimated to cause 400 Australians to take their lives each year. As one of the industries widely considered unethical, gambling is another major sector to avoid investing your super in.

How to find out if your super is ethically invested

Transparency is a challenge when it comes to super funds, and this is reflected the industry anxiety surrounding proposed portfolio disclosure holdings arrangements for super funds. Future Super has conducted research into the publicly disclosed holdings of the top 50 Australian super funds, to provide a sense of transparency for consumers looking to find whether their super is invested in unethical industries.

The result is this easy-to-use tool (screenshot below). Simply type the name of your super fund into the box and click on the applicable name to find out if they have holdings in problematic industries. Hover your mouse over the categories to find out the specific stocks they have in these sectors.

Note this tool is based on publicly disclosed holdings only. Your super fund could have holdings in unethical areas but not disclose it. In that case, approach your fund to find out more about their investments.

Finding an ethical super fund gives you the peace of mind that growing your retirement nest egg isn’t going to cause harm to others. Whether it’s avoiding fossil fuel industries or child labour, ethical funds can applying strict screening criteria without compromising on growth and financial performance. By choosing Future Super, you can secure your future without causing damage. Switch to Future Super in two minutes today, or contact us for more information.

Make the switch to help #StopAdani 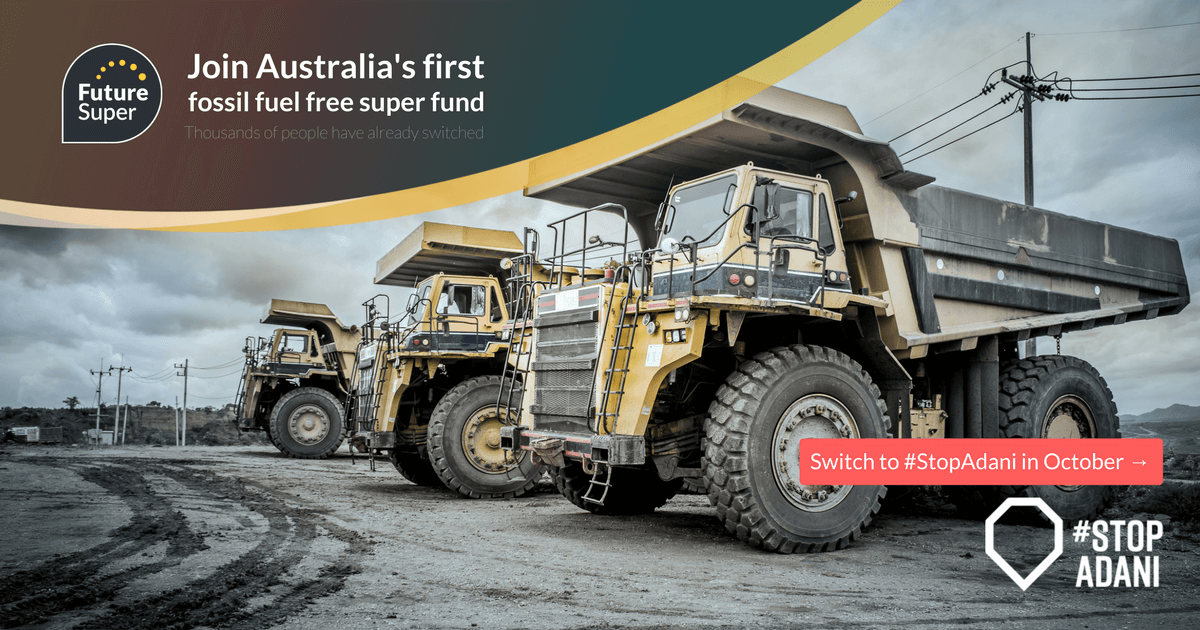